Hello Freedom Mobile, and welcome to Canada Cellular Services. It's not a new carrier, but simply a name change for Wind Mobile, with a cute mascot! We're looking forward to the rollout of their new LTE network, in the new year.

Also, we'd like to wish our clients and friends a Merry Christmas and all the best for 2017. 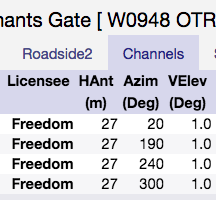 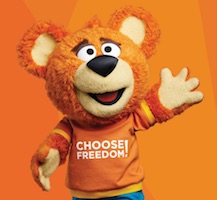 Canada and Australia Cellular Services' Historical View is a popular feature now available to most subscribers. It's a window into the past, letting you observe how a site grows, either through new radio channels, or tenants.

Today, we have expanded this window, to show the current and previous three months, in addition to the 1 and 2 year old views.

We have data as far back as 2004, so if you'd like this Historical View to expand further, please let us know. 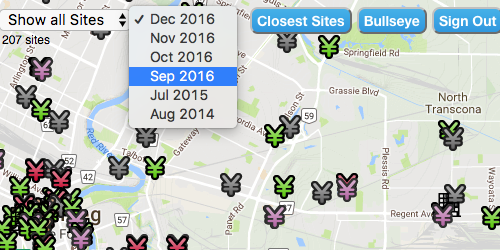 Closest Sites is one of the most popular features of Australia and Canada Cellular Services, and a quick & easy way to identify signal interference between your location and nearby cellular & wireless broadband sites.

A few of our clients asked if we could expand this feature to capture the effect of foliage, such as tall trees, on signal interference. Today, we can answer Yes!

Consider the dark green topographic graph below. No signal interference detected because it does not consider foliage:

In comparison, the analysis below adds 15m of foliage, shown in pale green. Suddenly, five red zones appear, hilighting where foliage might cause signal interference:

If you use Firefox, Safari or Chrome, the Fresnel zone and foliage graph redraw each time you change the Antenna Height or Foliage Height parameter, via the cursor up / down keys. 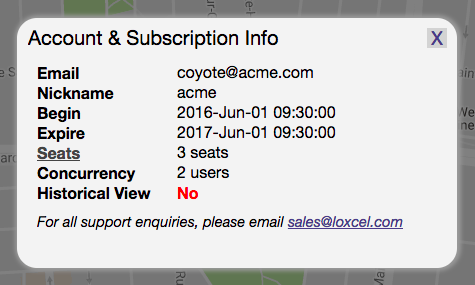 As we predicted in an interview with the Toronto Star in 2013:

Let's look at growth in antenna capacity, instead: 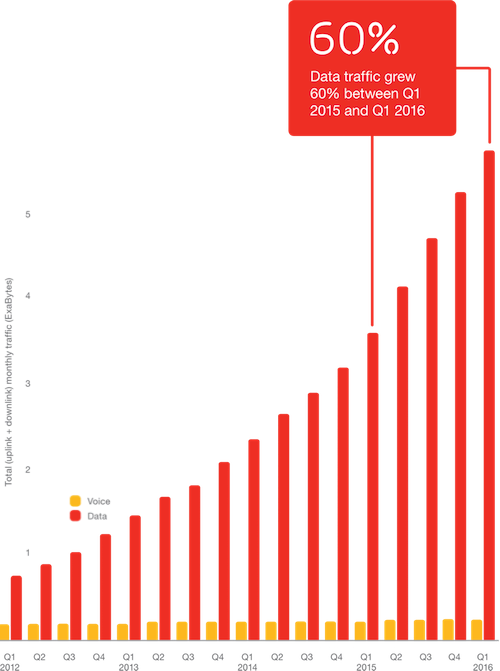 It appears that growth in antenna capacity — not site counts — more closely models growth in data traffic. This makes sense, as it's faster and more economical for a carrier to deploy spectrum on an existing site than a new site. In fact, most of the MBS 700MHz spectrum was deployed on existing sites.

In summary, network capacity is best measured — not by site counts — but by antenna capacity.

The Canada and Australia Cellular Services now let you look into the past. A new drop-down control, to the right of the filter and to the left of the Closest Sites button, lets you choose where to look. 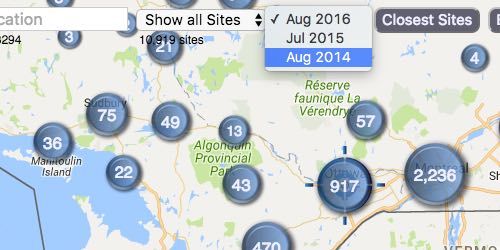 This historical view also introduces a few other changes:

Historical view is a new feature available to subscriptions created on or after July 28th, 2016. If your subscription was created before this date, please contact us for more information.

A subscription allows one person to sign in at a time. Depending on the seat limit, a sign in is possible from multiple computers throughout the day (from midnight to midnight, Eastern Time / New York), allowing the subscription to be shared:

Update: You can now view your subscription's seat limit.

Consider this example, where you and your co-workers share a Canada Cellular Services subscription:

We can customize your subscription's seat limit (or multi-user concurrency limits) to meet any requirements, from a small office to a large enterprise. Please contact us for details & pricing.

This week's updates improve coverage for both the Canada and Australia Cellular Services. 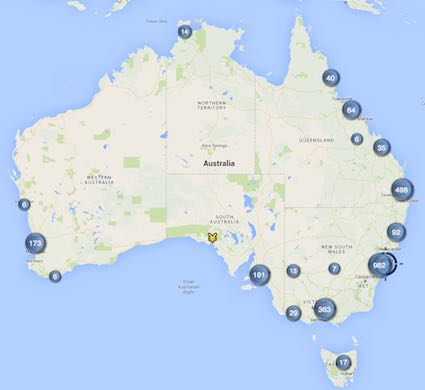 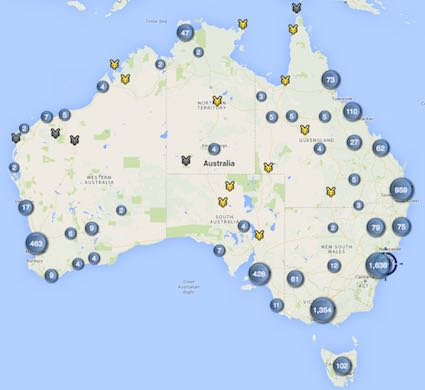 This is the largest update to the Australia Cellular Services since it launched two months ago.

Ground truth means to verify by direct observation, and is a necessary step before putting any data to work.

An organization that makes decisions solely from this raw data exposes themselves to risks and potential liabilities.

Also, our nation-wide customer base inform us of variances between what Canada Cellular Services says and what they observe in the field.

Our Data Detectives — internal and external — are constantly reviewing and improving the quality of this data, used by the Canada Cellular Services and custom reports. 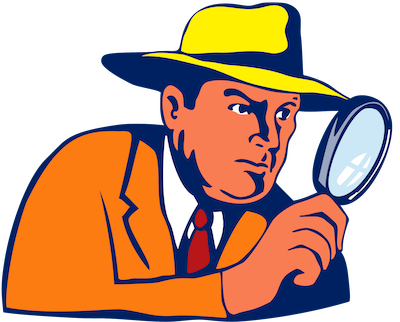 One example involves two Data Detectives from Western Canada, who recently observed cellular activity from a band that did not appear on the Canada Cellular Services. They immediately informed us of this variance, which we confirmed, obtained the missing data and restored the missing coverage. This restoration added 4,000 antenna channels to the Canada Cellular Services.

It's all about providing the best data and tools to help you make smart decisions concerning the growth, distribution & efficient use of cellular & wireless broadband assets across Canada.

2G capacity in the 850MHz band has dropped precipitously in every province, whereas 1,900MHz capacity has dropped somewhat less. This shedding of 2G capacity is consistent with past trends. In summary, 2G channel counts currently stand at 14,845, a 33% drop from April. 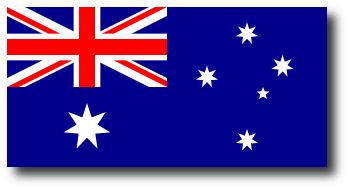 As of summer 2015, the amount of spectrum available to provide mobile services to consumers has grown by almost 60 percent since early 2014. This is the largest amount of spectrum ever released in such a short time in Canada, allowing Canadians and their families to benefit from the latest technologies and world-class services.

Large chunks of spectrum has been released, but as this graph shows, some people have access to more of it than others:

Each vertical bar represents the amount of spectrum deployed at the cell site, divided by the census population, for Canada's 31 largest urban areas. Each bar is divided into colored segments, representing the cellular bands deployed (see legend at right). Units aren't important here, as we're interested in variance among urban areas, not absolutes.

The graph shows great variance across Canada, with Halifax on top, closely followed by Vancouver, St. Catharines and Calgary.

This visual illustration continues the discussion of an earlier article concerning the relationship between channels and antennas.

Last fall, we posted construction photos of Bell site W4925, a stealth monopole. This time, we look a little deeper: 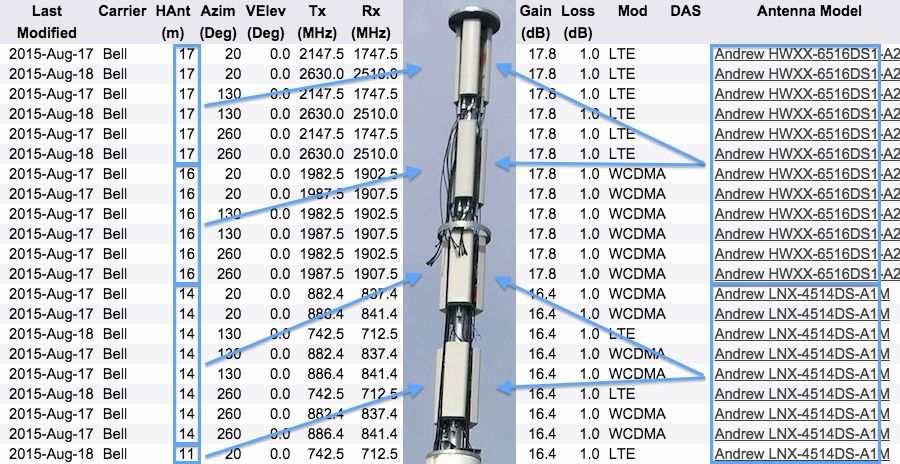 According to the specs below, the six HWXX-6516DS1 antennas at 17m and 16m are taller and narrower than the six LNX-4514DS antennas at 14m and 11m, and is consistent with their appearance in the photo above.

Last week, we reported 752 DAS sites. Since then, we've been scouring our database and have found even more DAS sites, bringing the total to 1,007 sites.

Here's the current total, by carrier:

On a related note, the comment section from this article mentions small cell sites in Victoria, BC. The Canada Cellular Services shows many of these sites, typically Telus sites with antennas 4 - 8m above ground level.

A Distributed Antenna System (DAS) is a network of small, low-power antennas, cabling and radios that provides cellular service to a small, confined area, often inside a building, stadium or similar structure.

Last week, 752 DAS sites were added to the Canada Cellular Services — depicted with the same icons we use for cellular sites. The picture below, at the left shows the location of nine DAS sites in downtown Ottawa.

Do you see them?

Neither could one of our trusted advisors, who had this to say:

Showing indoor sites along with outdoor sites is a bit misleading, as it seemed to suggest there are more sites out there than there really is. None of the indoor sites will have any impact on someone outdoors.

As shown at the right, DAS-only sites are now depicted with a building icon:

The number of channels reported by Canada Cellular Services does not always equal the number of antennas you will see if you physically visit the site. And the reason why has to do with economics:

This single-band cellular site can economically deploy one antenna per channel:

For example, this large, multi-band site deploys approximately one antenna for every two channels:

Antenna and radio information is now listed under the Channels Tab:

(Values that match the filter (ie. Wind) are in red.)


The Closest Sites tool adds two columns to the left of the Last Modified column:

Their descriptions are as follows:

If you have any comments or questions about these changes, please contact us.

You need accurate and timely information.

Right now, about 1,000 sites across Canada (mainly in Halifax, Winnipeg and parts of the Greater Toronto Area) include Roadside Views and new information.

Over time, we'll expand coverage to all 19,000 sites across Canada, providing you the best source for information about Canada's cellular and wireless broadband landscape. 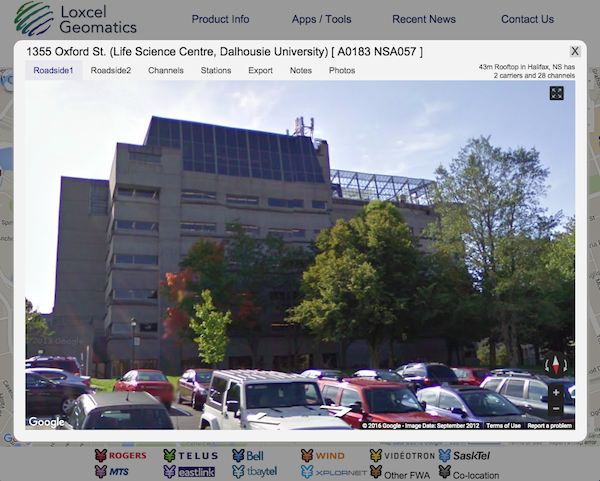