The new Export KML feature works best with accurate channel antenna model information. To that end, we cleaned up most of this information provided by Canadian licensees to ISED:

(Totals for Bell and Telus include duplicates.)

The cleanup offered these additional benefits:

We'd like to welcome these three Canadian licensees to Loxcel Cellular / Broadband Services:

SaskTel fusion and TekSavvy SkyFi are accessible to our Broadband service subscribers. Please contact us for information.

Loxcel Cellular Services can now export multiple cellular and fixed wireless sites to one Google Earth KML file. This video captures a flyby through one of these KML files. You'll see

Each site appears as a simple monopole, which simplifies the depiction of its antenna layout.

The Places panel provides detailed technical information about each site, as well as the means to "fly" to a site or zoom in on its antenna panels.

We created the video above by clicking on selected monopoles and antenna panels. 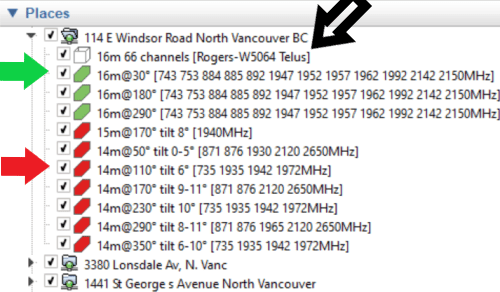 To begin, expand the control panel, center the map over the sites of interest, and click Export KML. The right arrow points to a counter of how many sites will be exported. Table 1 lists how many sites you can export.

Google Earth's 3D Buildings layer adds perspective and photorealism to the 3D viewer. However, it also will clutter and obscure your view of the monopoles and antenna panels.

To remove this clutter, toggle the 3D Buildings checkbox from inside the Layers panel, which is at the bottom-left corner of the Google Earth window, below the Places panel.

As the video above shows, disabling 3D Buildings makes the monopoles and antenna panels more visible and thus easier to see.

A KML file becomes "stale" immediately after our wireless database has been updated, which happens every few days. Google Earth can open a stale KML file and site addresses will appear inside the Places panel, but nothing will appear in the 3D viewer. If this happens, sign in to Loxcel Cellular Services and export a KML file that includes the most recent updates. 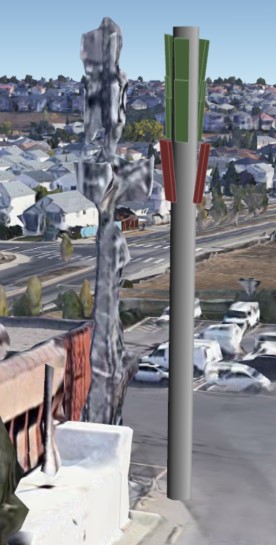 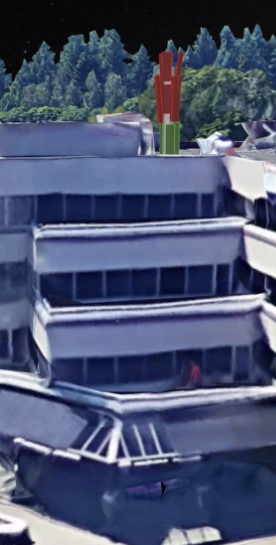 The Export KML button can export a site as Detailed 3D antenna panels (as depicted in the video) or as a simple pushpin, which when clicked shows structure height and channel counts. The simple pushpin export type receives a higher export quota, as outlined in Table 1 above.

To choose one, click the blue Account button to display the Account & Subscription Info pop up. Then, make your selection next to Export KML Type. Your subscription quota appears on the line below. A warning will appear if you attempt to export beyond your quota. 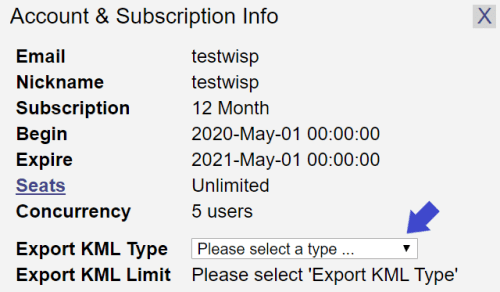 Rogers 5G comprises 2.2% of their Total Bandwidth, a percentage expected to increase as 5G service deploys beyond BRS 2500MHz and into other bands.

The following maps show the current distribution of Rogers 5G sites across Canada: 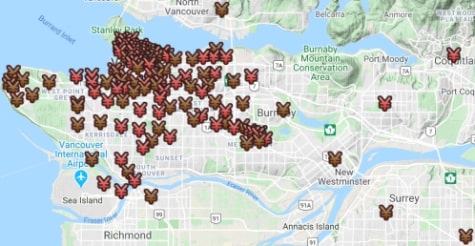 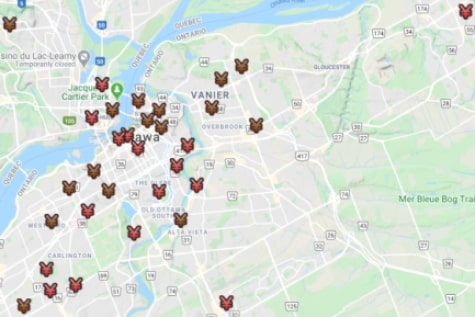 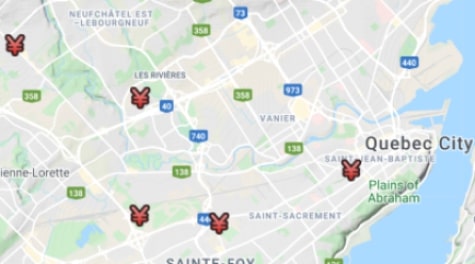 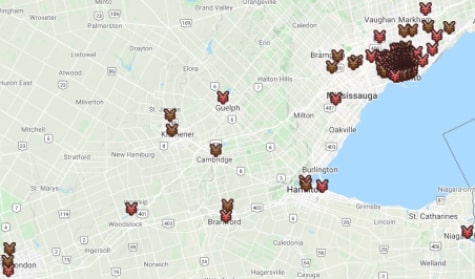 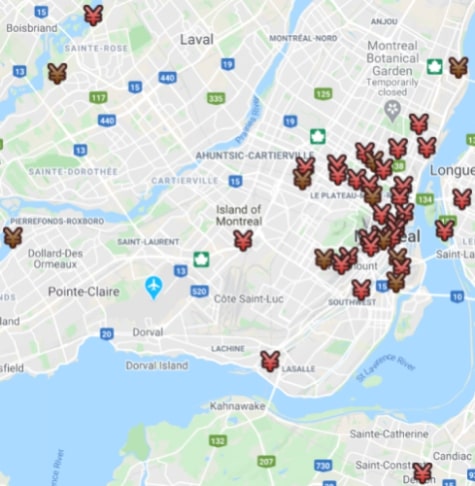 Although not shown below, from March to April, Xplornet increased both

Canada, Australia and New Zealand Cellular Services use data sourced from ISED (Canada), ACMA (Australia) and NZRSM (New Zealand). We manage the quality of this data by closely tracking site and channel counts, and apply corrections as needed.

Starting this month, we're tracking a third metric: Total Bandwidth, the sum of all channel bandwidths with unique transmit frequency and horizontal azimuth. This metric is more accurate than channel counts at measuring the capacity of a wireless network, as it is not bias by the presence of duplicate channel records, common to varying degrees among most carriers.

For an example, Figure 1 shows a large spike of 221,056 Telus channels on March 2018. However, Figure 2 remained flat on March 2018, suggesting this spike represents duplicate channel records in the SMS snapshot — and not additional network capacity.

Table 1 shows how we calculate Total Bandwidth. The six channels were taken verbatim from the SMS snapshot dated 2020-03-04. All have the same 130° horizontal azimuth. All report the same 15MHz bandwidth (Tx High - Tx Low). Channels are grouped by horizontal azimuth. For each group, channels with identical Tx frequency range (# 2, 3, 5 & 6) are discarded, and channels with overlapping Tx frequency range (# 4) have their overlapping portion removed.

Table 2 shows the difference in Total Bandwidth if duplicate and overlapping channels, as described above in Table 1, were not removed. Telus' 32.9% is caused by many duplicate channel records in the SMS snapshot.

The chaotic graphs in Figures 1 - 6 and the over-reporting of total bandwidth in Table 2 raise this question: is Total Bandwidth a valid metric? To answer, examine Figures 7 - 9, which are the equivalent graphs for Australia, a country of comparable size to Canada:

Figures 8 and 11 show steady and accurate growth of Total Bandwidth across all carriers in Australia and New Zealand, and Table 3 reports minimal over-reporting — suggesting Total Bandwidth is a relevant and helpful metric to measure the capacity and growth of a nation's wireless network. The chaos pictured in Figures 1 - 6 and over reporting captured in Table 2 suggest data issues with Canada's SMS snapshots, especially for Telus and Freedom.

This table shows the monthly growth of Telstra's 5G network across Australia, starting in May 2019:

You can see these 5G sites and more at Australia Cellular Services.

January's SMS snapshot contains 234 Rogers 5G sites of which all but 20 are missing from February's snapshot. The red line in the top-left graph below shows February's snapshot lost 584 Rogers sites, of which 214 are from their 5G network. We doubt Rogers is scaling back their nascent 5G network, so these lost sites are likely an error.

Meanwhile, Telus' channel and site counts remain unchanged from January, and Bell's site count increased from 7,172 to 7,234, along with small increases in channel counts across all cellular spectrum bands. 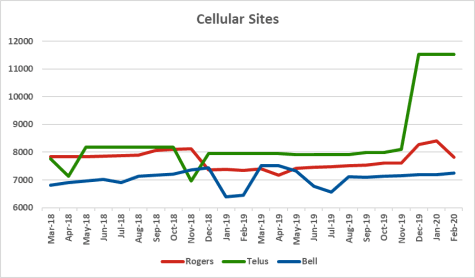 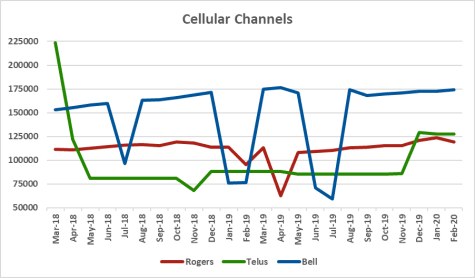 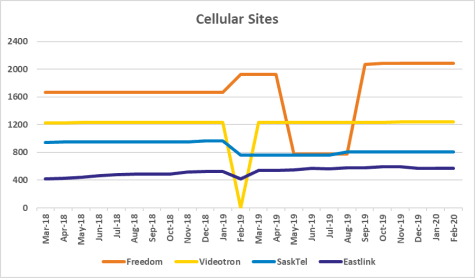 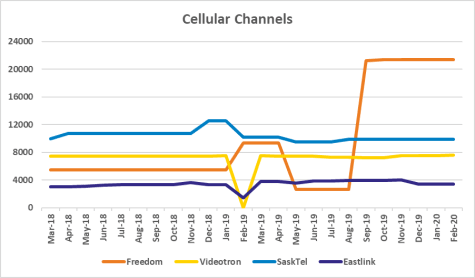 Like we did last year with Telstra in Australia, we are now tracking the growth of Rogers' 5G network across Canada: 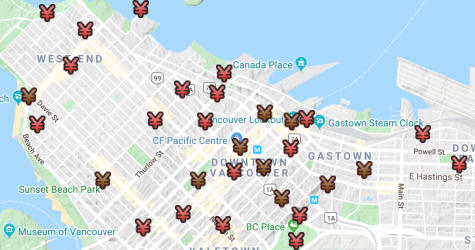 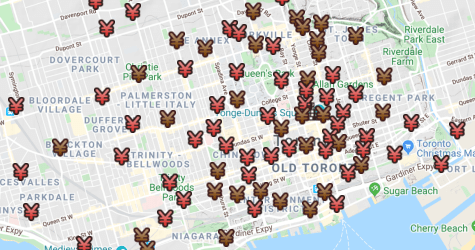 Rogers 5G uses Block I (in green below) from the BRS (2500Mhz) Frequency Block Plan:

TDD can operate statically or dynamically. Dynamic TDD adjusts the ratio of time slots assigned to DL and UL, as demand warrants. For example, people at a concert or a sporting event need more UL to push videos & audio recordings to social media; conversely, on the GO train, people need more DL to consume Netflix or podcasts. Dynamic TDD can handle either scenario. We do not know if Rogers 5G uses dynamic or static TDD; but for now — to meet the hype surrounding 5G — we'll assume dynamic TDD.

The growth of Rogers' 5G network is as follows:

The graphs below show cellular site counts for Canada's 20 most populous Census Metropolitan Areas (CMA), ordered by population (most populous first). They provide more detail than the site graphs we have published monthly since Jan 2019.

A CMA comprises one or more adjacent municipalities and townships that are closely integrated in some way. For example, the Toronto CMA consists of the city of Toronto along with Mississauga, Brampton, Markham, Vaughan, Richmond Hill, Oakville, Ajax, Milton and 15 other smaller townships. In contrast, the Halifax CMA consists of the municipality of Halifax by itself.

We can perform custom analysis of Canada's cellular & fixed wireless sites, channels & bandwidth capacity along other census geographies, from as small as the neighborhood to as large as the nation. Please contact us for more details.

Last month, Rogers added 92 sites across Ontario and 583 sites across Quebec, which you can see in the sudden rise of the red line in the top-left graph below. But, most of these sites are not new, but only a correction to the disappearance of a similar number of sites one year earlier.

In short, SMS snapshots from Dec 2018 to Nov 2019 do not accurately represent Rogers coverage across Quebec and Ontario. 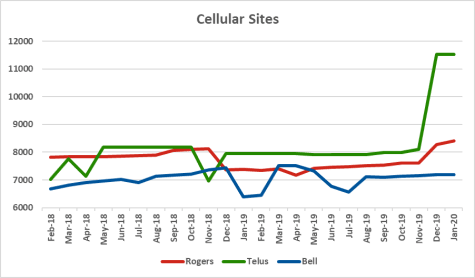 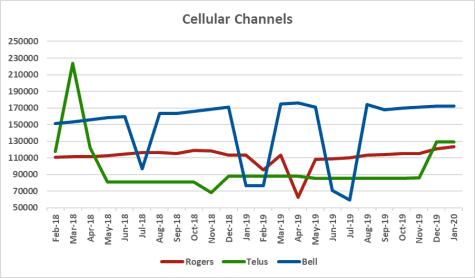 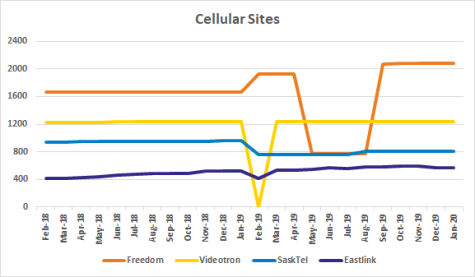 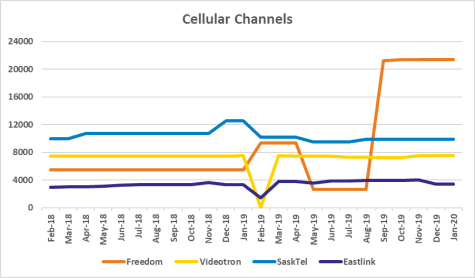