The surface of the earth more often follows the shape of a curve than of a straight 30 meter line. For this reason, bicubic will reduce RMSE values over bilinear interpolation when operating on DEM grids of 30 meters or greater. (For grids of 1 or 2 meters, RMSE differences fall below the noise floor, making bilinear acceptable.)

To demonstrate this, we reran our previous study but with bilinear interpolation on the two relatively uncluttered landcover types, short vegetation and barren, which provide good exposure of the curved earth to the sensing equipment above. The results are below: 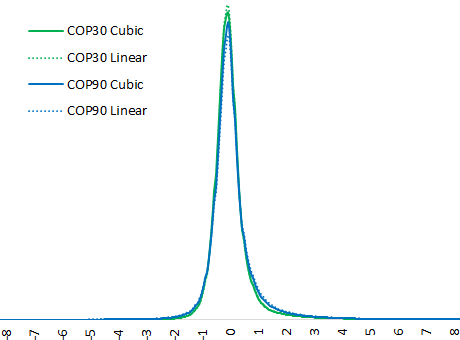 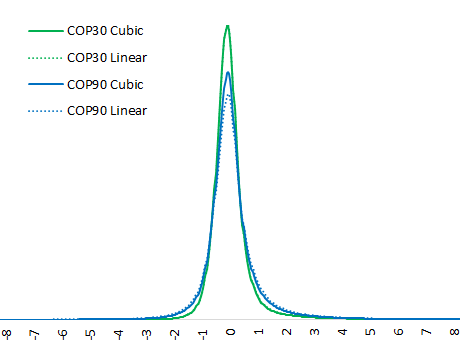 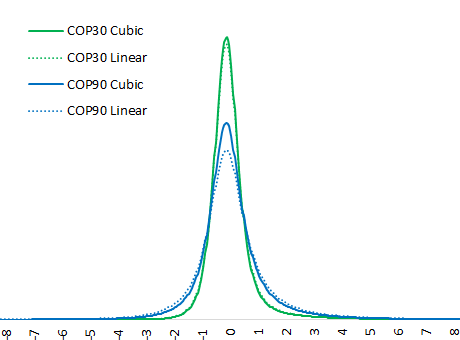 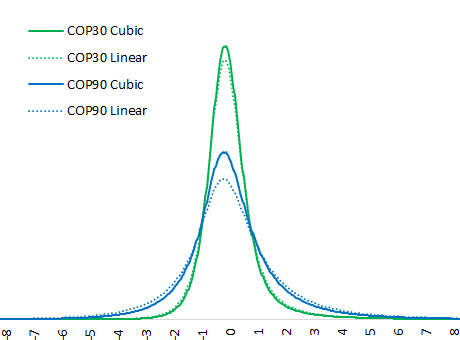 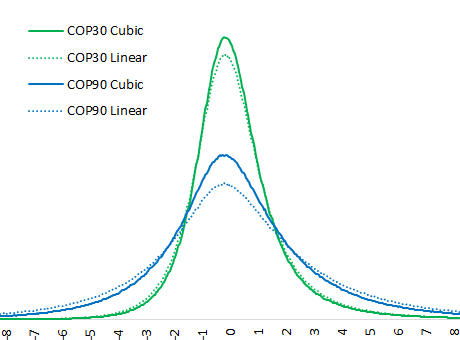 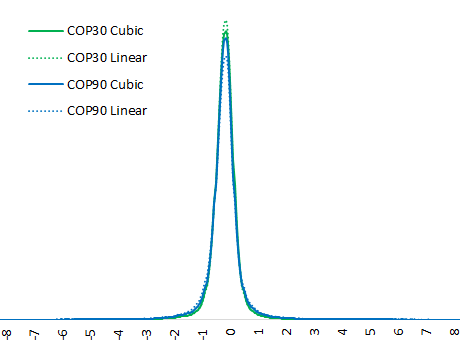 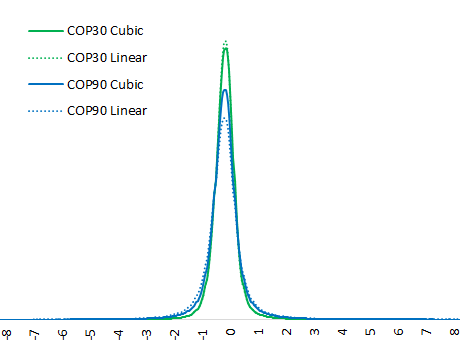 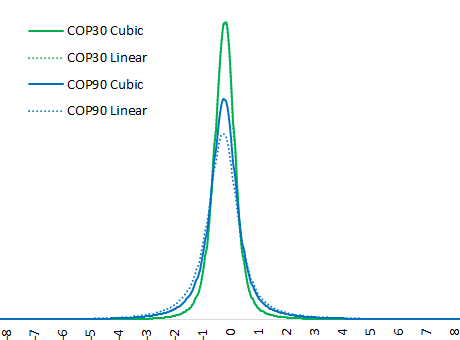 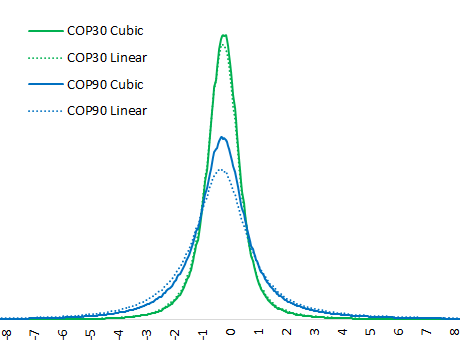 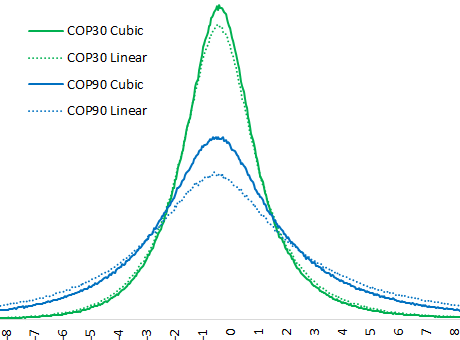 
Bilinear interpolation returns a lower RMSE for Copernicus DEM 30 in very rugged terrain (terrain_slope > 0.125). This anomaly might be due to issues with ICESat-2 ATL08 and its 100m segment size.

Bilinear involves far fewer calculations than bicubic. We ran a variety of benchmarks to measure the throughput of both interpolation methods and found bilinear to be as fast to four times faster than bicubic interpolation, depending on the frequency of CPU cache misses. If throughput is important to you, use bicubic interpolation and optimize how you access the DEM grid. CPUs access memory sequentially 100X faster than randomly. Based on the physical layout of most uncompressed DEM grids, start with the highest latitude, work east, and then work south.

Copernicus DEM presents the highest standard in accuracy for a global DEM. Bilinear interpolation will degrade this accuracy, especially for the 90m product. If performance is a concern, use bicubic interpolation and query the DEM in a way that minimizes CPU cache misses.

Fortunately we have many DEMs to choose from, including these six which are the subjects of our comparison:

Each DEM has its own strengths, and choosing the the right one depends on evaluating metrics such as

Our study addresses only the first metric above, Vertical accuracy (absolute). We loosely followed the approach of this study which used ICESat-2 ATL08 segments as vertical control points, but with a few differences:

An ICESat-2 ATL08 segment reports one latitude, one longitude, one terrain and one canopy elevation from where 100s of photons struck a track 14m wide and 100m long, at ground level, up in a pervious vegetative canopy — or infrequently way up in the clouds! This process is at the forefront of remote sensing technology and offers an unbelievable volume of data with an unbelievable level of precision. But, what about errors and their distribution? Are they random or have some systemic properties? If the 100m track is flat terrain, we have confidence in the values reported. For rough terrain, our confidence drops. For this reason, we caution you when interpreting any results below where terrain_slope > 0.02 (ie. > 2m / 100m).

RMSE, Mean, StDev and x-axis are in meters. Graphs omit ASTER as its curves ride near the x-axis (it's not that ASTER is bad; it's that Copernicus DEM is very good!) Toggle the Terrain Slope buttons to see results at various slopes (for uncluttered landcover types only). 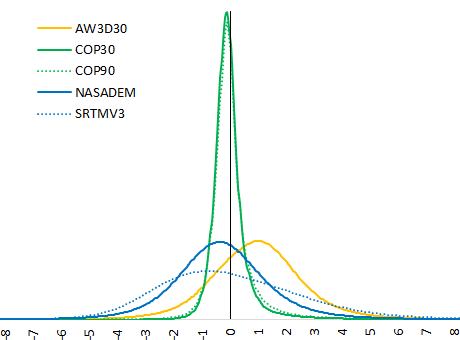 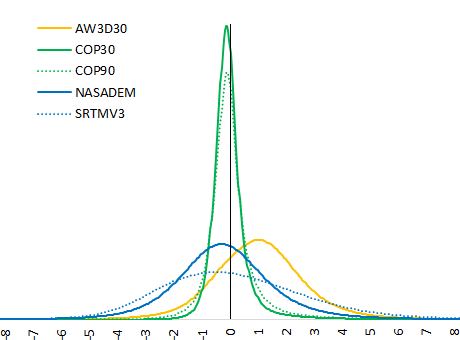 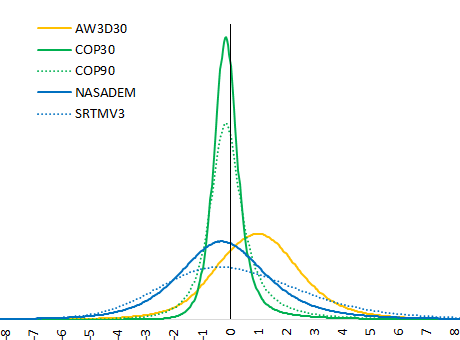 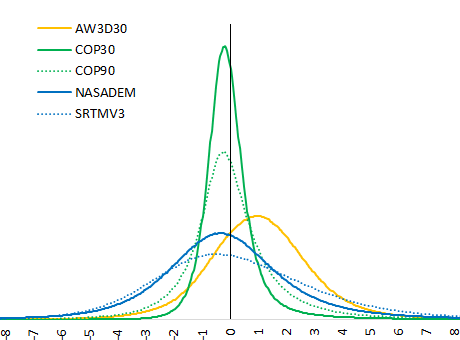 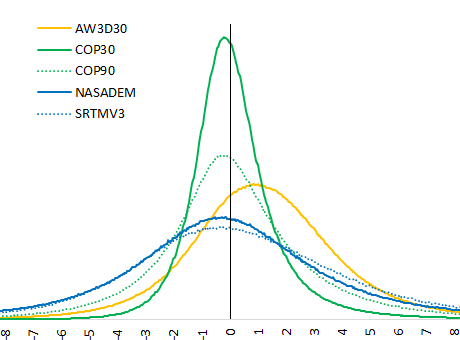 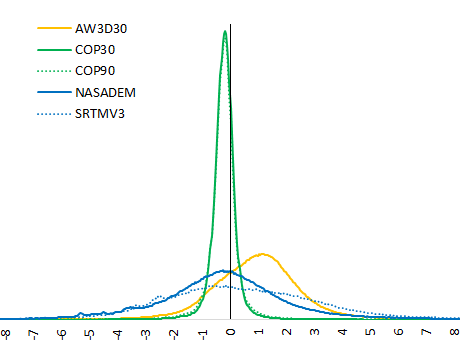 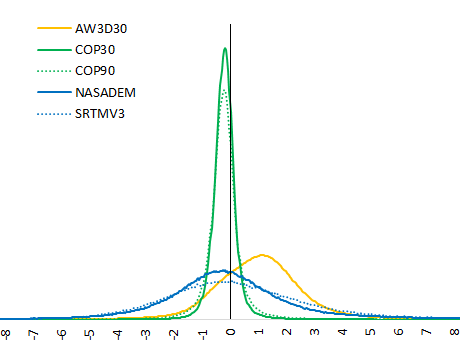 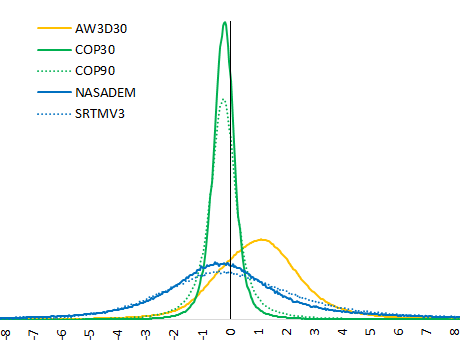 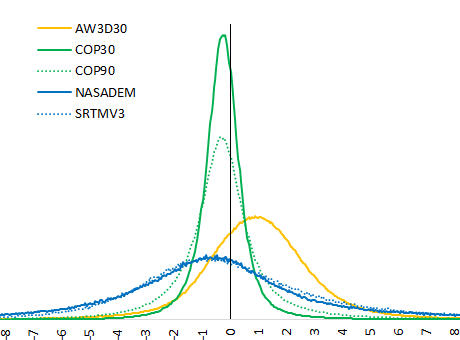 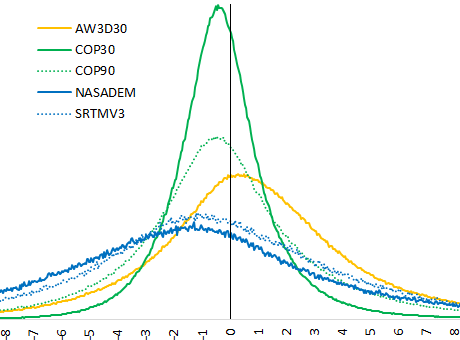 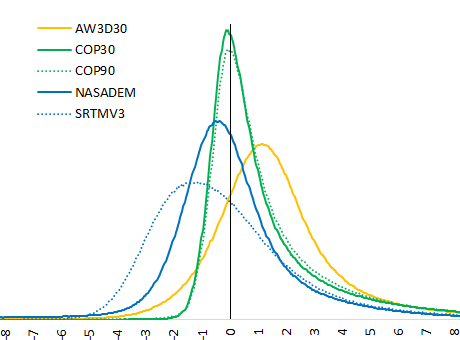 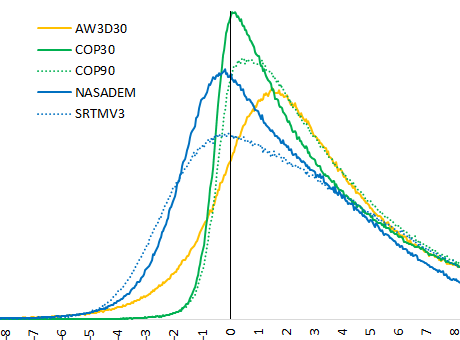 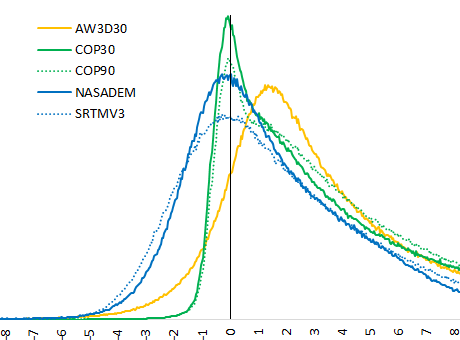 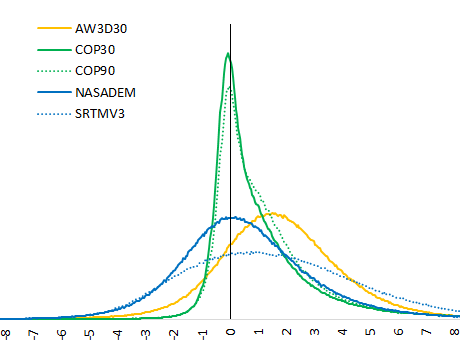 We use DEMs for wireless propagation studies, where a tree can act like a hill, blocking all signals. So, Copernicus DEM measurements closer to the top of the forest canopy is a bonus, and its higher RMSE value (6.16 for COP30 vs 4.00 for NASADEM in mixed forests) is not a concern. For you, this higher RMSE value might be a concern. It all depends on your use case.

Please contact us if you you have any questions about our study.