This article appeared in the March 2011 issue of Geospatial Today.

Search for Pizza in New York on Google and Bing, and you will find a map at the top of their search engine result pages, two of the most valuable properties on the web today.

These four consumer mapping platforms now represent -- to more than one billion people around the world -- what is meant by a map.

It is surprising that the established and well-funded GIS industry played no direct role in these developments. But consumers are not surveyors or field workers. And consumers are not urban planners who need a map to perform complex analysis.

Consumers make purchases, attend events, connect with friends and sometimes act on impulses, and like GIS professionals, use maps -- but for different reasons:

A consumer is a distracted user and expects a map to respond instantly to a mouse click or a swipe across a tablet's screen. And this map must operate on smartphones, which are quickly becoming consumers' Internet platform of choice.

E-commerce retailers need to look beyond their stale store locators to see what a map can really mean to their consumers. A map that considers a consumer's social graph, current location, purchase history and time-of-day can deliver more relevant content and increase sales.

New York City sponsors the NYC BigApps competition, which provides the public with access to 350 datasets from over 40 city agencies. Netizens who create the best maps from this data are awarded cash prizes and lunch with the mayor.

Some cities however lock their datasets away and license them only to wealthy organizations for a fee. And when they want to put a map on the web, they build it themselves. For an example, visit this webpage and click on the Launch eMaps button.

If you're running Windows XP with IE 6, you'll see this welcome screen: 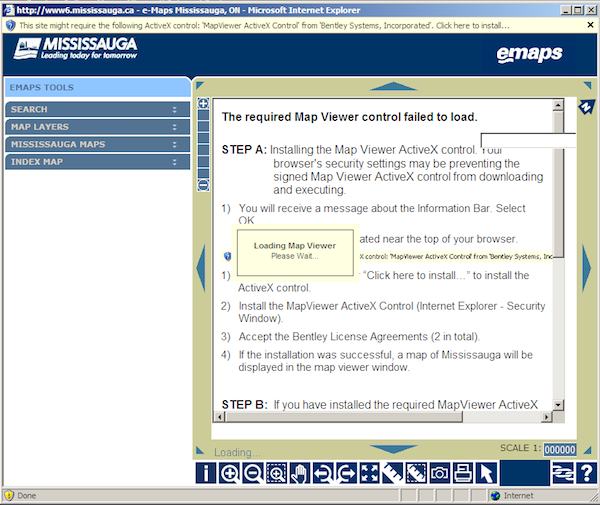 You are then asked to install an ActiveX control, accept two license agreements and open ports 8081 and 8084. (If you're not sure how to do that, you might be inclined to just disable your firewall.)

Unless a virus found its way through the opened ports and has taken control of your computer, you'll see a map that looks like the city found a magical web-enable switch on their GIS system and switched it on.

eMaps is not only a potential security hazard, but also an example of consumer mapping gone wrong.

Another example is the Select Ontario map, which showcases investment properties, infrastructure, location advantages and workforce statistics within a single application.

The first screen presents a disclaimer that mandates you to use the map for only personal and non-commercial use, which contradicts the map's intended purpose. Fortunately, this map doesn't use ActiveX controls or nonstandard ports. But it can be very unresponsive to queries, and like eMaps, is cluttered with an array of confusing controls.

Ironically, governments have good reasons to look for that web-enable switch, as other solutions built on consumer mapping platforms require extensive custom development to integrate with their GIS systems. 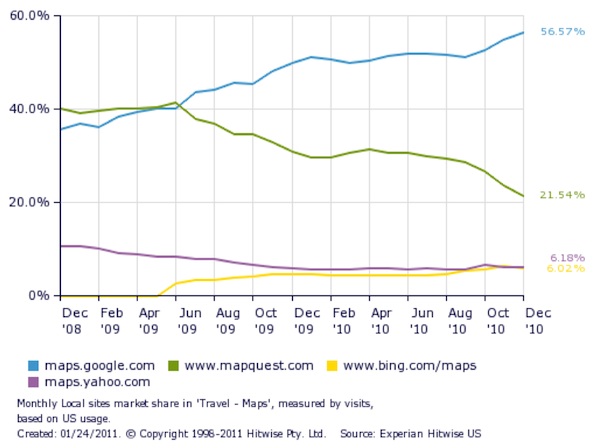 Although Google is the most popular (partly because it was first to support mashups, and has always been free to use for public deployments) MapQuest, Bing and Yahoo remain strong alternatives: MapQuest is a core component of SpatialKey, an advanced location intelligence tool; Bing is commonly used for business integration applications; and Yahoo supports Flash.

Bing and MapQuest can integrate with OpenStreetMap (OSM), a Wikipedia for vector road data. Your contributions to the OSM road network will appear on the map when Bing or MapQuest regenerates its tiles.

Platforms are licensed and priced accordingly, based on SLA, internal deployment, asset tracking and other requirements. Read the fine print, as one platform might be cheaper to license, or even free, under certain conditions. For example, Google can be cheaper than Bing, if the map is to be loaded into the browser once, and then used heavily for an extended period.

Most consumer maps consist of tiles and markers displayed in the browser via HTML and CSS. A map with more complex visualization requirements should consider a Flash-based mapping platform offered by MapQuest, Yahoo or Google. Unlike HTML and CSS, Flash can smoothly render thousands of shaded polygons and perform 3D transformations in real-time, much like a native desktop GIS application. (The HTML 5 <canvas> element is neither as capable nor available on all browsers.)

Critics dismiss Flash because it is a proprietary plug-in. This is true, but on the desktop, Flash is as ubiquitous as HTML. One caveat with Flash is its patchy support for smartphones.

Visit http://en.wikipedia.org/wiki/Comparison_of_web_map_services for a more detailed comparison of these and other consumer mapping platforms.

Everything on the web -- including your map -- competes with Facebook, YouTube, Yahoo and Twitter for the attention of consumers. Your map has to present a compelling user experience to counteract a consumer's impulse to groom their Facebook wall, watch a video or send a tweet about what was served for breakfast.

Desktop GIS applications do not face this competition, because its users are paid to use the map -- no matter how bad it is. When you flick the "web-enable" switch on your GIS, you project a desktop GIS application experience out onto the web, where it will be chewed up and cast aside.

eMaps fails as a consumer map not because of its data -- in fact, its data is very good -- but simply because it delivers a bad user experience.

To compete with Facebook and the other heavyweights, a consumer map must be responsive and easy to use, hallmarks of a quality user experience.

A responsive, high performance experience keeps the user engaged as a task unfolds, holding their hand along the way to its completion. The Velocity 2009 conference presented case studies that proved user satisfaction is influenced by the responsiveness of the user experience:

Consider a map that needs to display thousands of markers. A naive map waits until all data has been received from the server before displaying its first marker. If this marker takes more than a few seconds to appear, the user might wonder if something has gone wrong, or even believe he may have done something wrong.

Instead, the map can use one of these techniques to keep the user engaged:

Furthermore, if marker content is server-side, when a user clicks on a marker, the map should immediately display an empty info window, to acknowledge the click. The map then submits a request to the server for marker content and updates the info window after the response arrives.

Ease-of-use issues are more insidious than performance issues, and accumulate unobtrusively until the consumer simply says enough -- and goes back to YouTube. Once identified, they are usually easy to fix, as they fall into the same category of mistakes made by eMaps and Select Ontario, which place the gas pedal on the left and the brake on the right.

A consumer mapping platform pans the map in response to a click & drag action. eMaps is nominally a port of a GIS system, and provides modal controls that determine if this action will pan the map or zoom in to a rectangular rubber band. The rubber band is an efficient navigational aid, but its behavior is foreign to the average consumer, and should not be the default behavior for a click & drag action. If present, modal controls should default to behavior consistent with the dominant consumer mapping platforms.

eMaps and Select Ontario include a map scale control (e.g. 1:1,000,000), which is difficult to apply correctly to a digital map, takes up valuable page space and is meaningless to consumers. This control should be removed.

Smartphones and tablets are ideal devices for consumer mapping. Mobility brings freedom, as it's difficult for a consumer to navigate through life's moments, and act on impulses, while sitting at a desktop. Compared to a personal navigation device, a smartphone can access remote databases, acquire a location fix indoors -- where consumers spend 90% of their time -- and increase in function with each app installed. And consumers agree: the NY Times reported that 200 million users accessed a map from their smartphones over the previous 30 days.

Demand for smartphones and tablets have surged over the past two years (in millions of units): 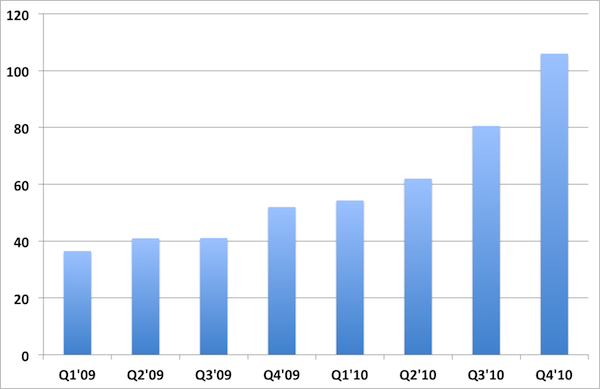 For 2011, IDC predicts worldwide sales of 330 million smartphones and 42 million tablets. Some pundits believe that by 2012, mobile will surpass desktop in unit sales. Acer recently announced plans to phase out netbooks in favor of tablets. And consumers trust smartphones enough to have increased their in-app purchases from $600 million in 2009 to $2 billion for 2010.

Maps serve as filler to a consumer's mobile existence, used fleetingly during interludes between tweets or texts between friends, which point to a need for a user experience better than that on a desktop. On the surface, this appears near impossible to accomplish, given the small screen, novel input methods, lower Internet bandwidth and limited battery life intrinsic to mobile devices.

Fortunately, many consumer mapping vendors continue to optimize and improve the user experience of their maps on mobile devices. This will help support a migration of consumer mapping from the desktop to the smartphone and tablet, and with this freedom, consumers will receive a more personal, connected and relevant experience.

Mobile devices soon will overtake desktops in unit sales, and provide consumers from around the world with more opportunities to interact with maps.

These maps will be created by netizens who will apply standardized web application and web service architectures, to deliver a responsive and intuitive user experience.

The GIS industry, with decades of experience collecting, organizing and distributing spatial data hopefully will share their expertise with these netizens, so that consumer maps can draw from authoritative and relevant sources of data, to serve the real needs of consumers everywhere.